Boneless Pork Chops in Creamy Irish Whiskey Sauce is a match made in heaven, and when you add some mushrooms to the mix – this amazing combination St.Patric Day Pork Chop recipe just can’t get any better!

You won’t believe how good it smells while cooking and how easy these Boneless Pork Chops in Creamy Irish Whiskey Sauce to prepare!

Make sure to use a good heavy skillet here, such as cast iron and make sure it’s a large one too.  I used 12 inch Lodge Pro-Logic Seasoned Cast Iron Skillet in this recipe – it’s well designed, has a helper handle and sloped sides – very sleek looking for cast iron!

And it’s one of my most used kitchen tools!

A more traditional looking cast iron skillet that is also very well made is this 12 inch Lodge Cast Iron Skillet – it never sticks or leaves weird black dots like other cast iron skillets do. And it has over 9,000 positive reviews on Amazon:

So, with St. Patrick’s day around the corner, this pork chop dinner can be quite a hit around your friends and family! But at the same time I don’t think that Boneless Pork Chops in Irish Creamy Whisky Sauce is limited to St. Patrick’s Day only.

Therefore let that whiskey venture out of your drinks cabinet and get straight into the kitchen! You won’t regret it!

“Whisky”: Most of the world including Scotland, Japan, Canada, Australia, England, Finland, Germany and India
“Whiskey”: Just the U.S. and Ireland.

Whiskey contains zero carbs and is perfect alcohol choice when on Keto diet.

Mushrooms are cooked in the same pan (after removing pork chops) in butter for a total of 4-6 minutes. I used baby Bella mushrooms to complement my boneless pork chops.

The sauce is made with Whiskey, heavy cream (or double cream), beef broth (or chicken broth) and Worcestershire sauce. It’s prepared separately from meat and mushrooms and flavored with Italian Seasoning.

Once done, boneless pork chops and mushrooms are returned back to the pan, with sauce spooned all over those tasty chops!

Depending on the thickness of your boneless pork chops, you may just need to reheat them on the stove top. However if they as thick as mine, put them in the oven at 375 F for about 8 minutes until internal cooking temperature reaches 145 F to 155 F. Keep in mind that they cook and dry out fast and once out of the oven, the momentum of heat will continue cooking them a bit further.

If you are looking for more St. Patrick’s day dishes or Irish recipes, I have several of those on this site as well:
Instant Pot Irish Beef and Guinness Stew
Instant Pot Corned Beef and Cabbage
Irish Mashed Potatoes with Bacon (Colcannon) 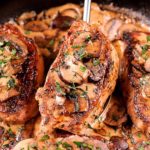 « Instant Pot Beef Stew
How to Spatchcock a Chicken »