No Bake Chocolate Dessert is easy to make using pre-made Oreo crust, Cool Whip, instant Jell-O chocolate pudding and half-n-half. This is an easy recipe that is ready in under 30-minutes. Kids love it and so do the adults. No oven time is required! 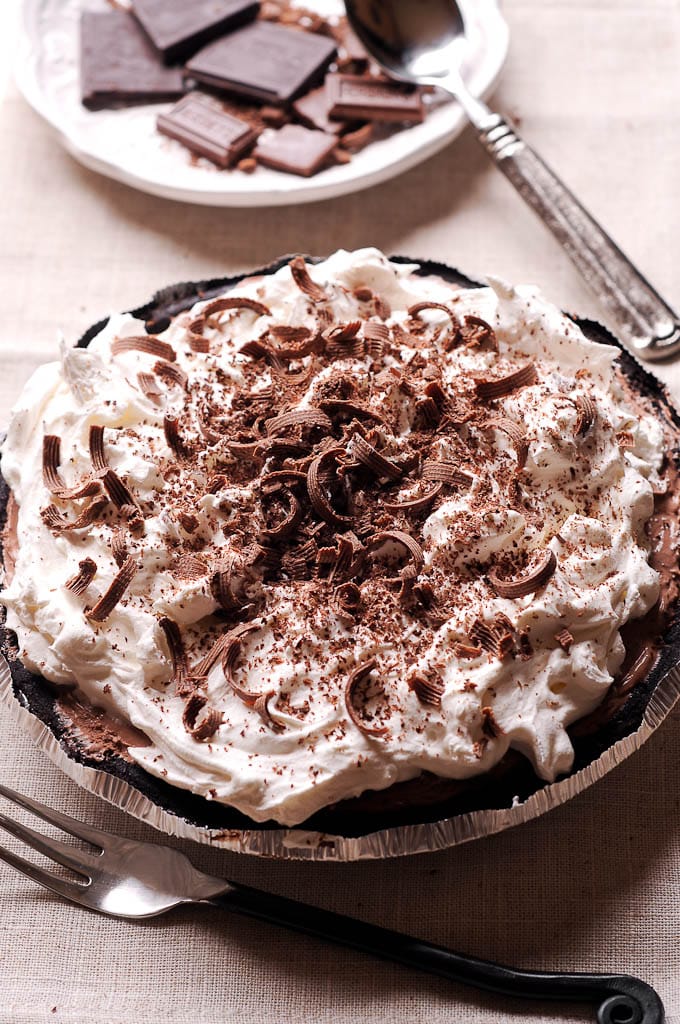 This double chocolate layer pie is topped with delicious chocolate shavings. I made out of Hershey’s milk chocolate and grated dark chocolate! Unlike my No Bake Oreo Dessert, where I crushed Oreos to make the crust, here I use premade Oreo crust. It is thin, not labor intensive at all, and cuts nicely. Perfect for hot summer months without turning your oven on! 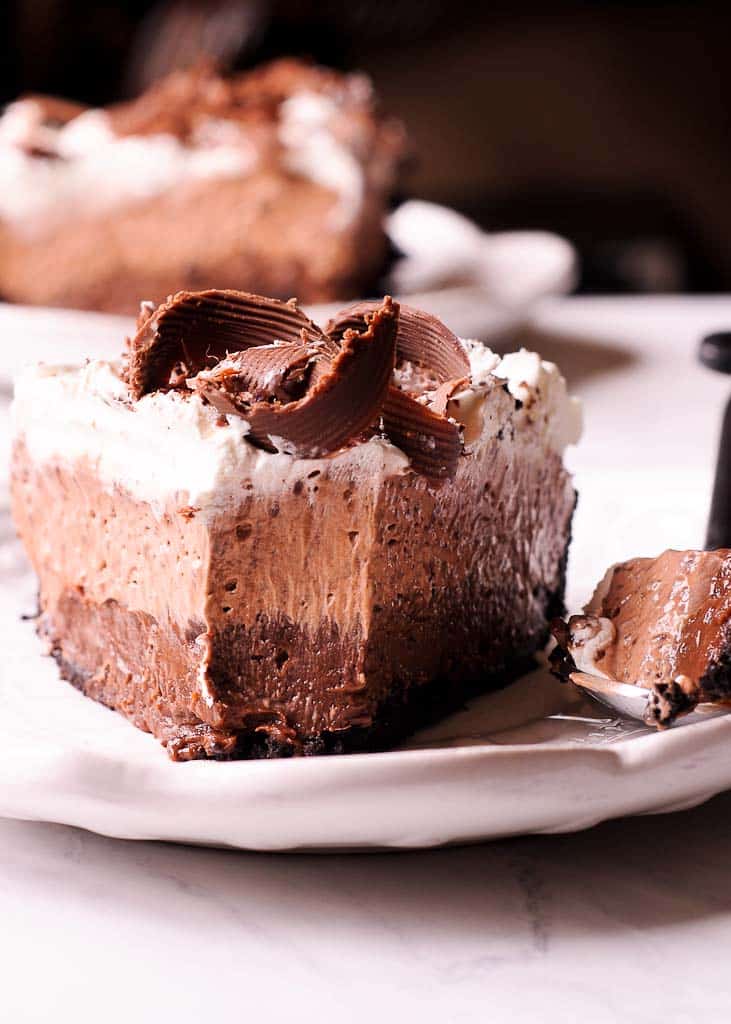 TOOLS YOU WILL NEED TO MAKE NO BAKE DESSERT

You will need a whisk to make pudding, such as this stainless steel comfortable grip whisk.

Spatula will help you to spread the layers. While you will use Vegetable peeler for chocolate decoration on top, such as this serrated swivel peeler. I also used Medium bowl such as one of these non-slip stainless steel bowls that come with lids. 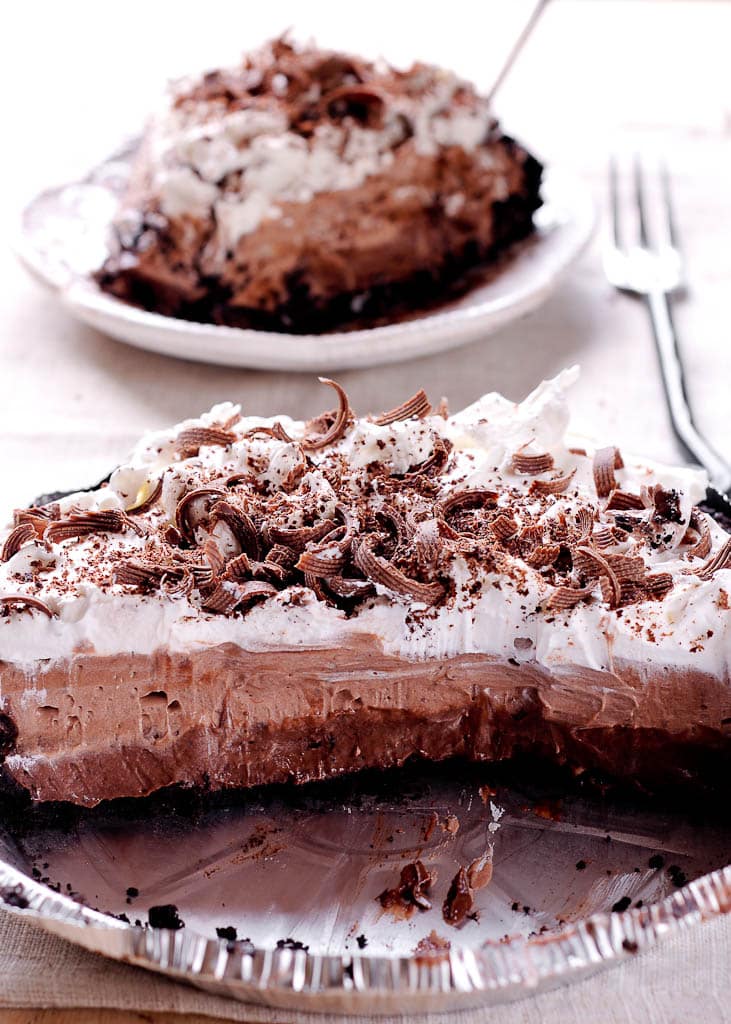 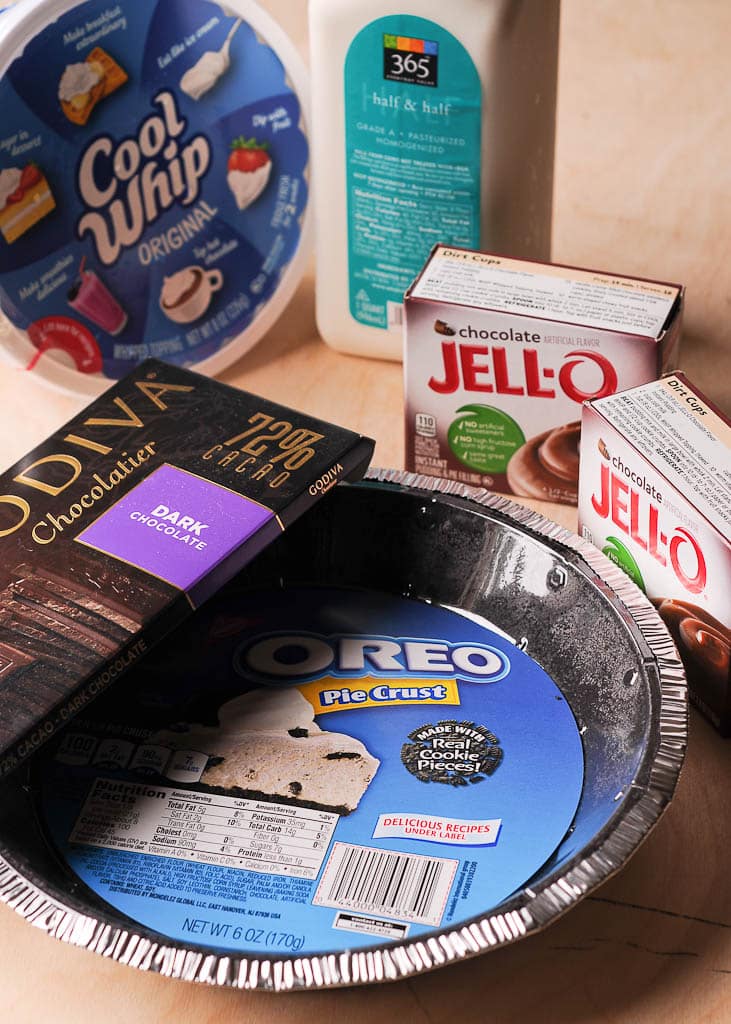 Please ignore the instructions on the label of the pudding mix. My Instant Chocolate Pudding Mix – Jell-O package called for 2 cups of milk per box of pudding mix. This would make it 4 cups for both boxes. But we are not going to be adding this much liquid at all. In this recipe, we add a total of 2 cups of half and half to two packages of Instant Chocolate Jell-O pudding mix. Each package is 3.4 oz.

Using half and half instead of milk will add more fat into the mixture. It will also make the pudding structure firmer and more stable. That’s exactly what we need for the layers to be nice and distinct. Using half and half will also help create a nice thick bottom layer and very soft smooth middle layer. 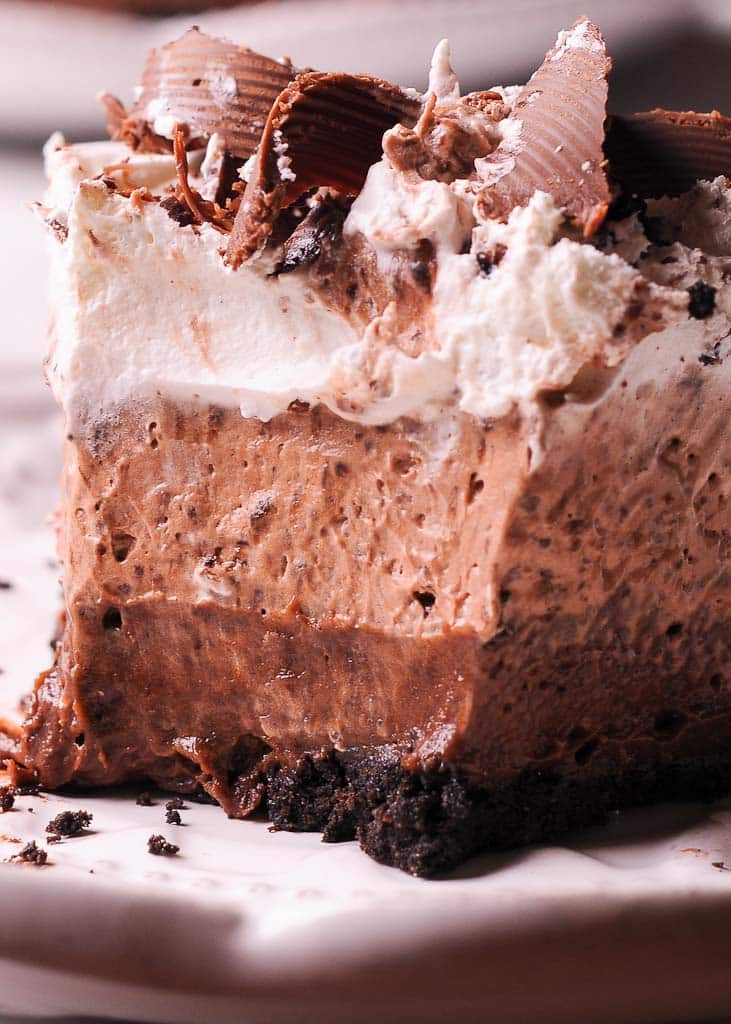 To make it easier to divide and cut, make sure to refrigerate the pie for at least 4 hours or overnight.

Take pie crust out of package, but make sure to keep it inside the foil. Do not turn it upside down or attempt to take it out. Or, it will get crumbled and destroyed. 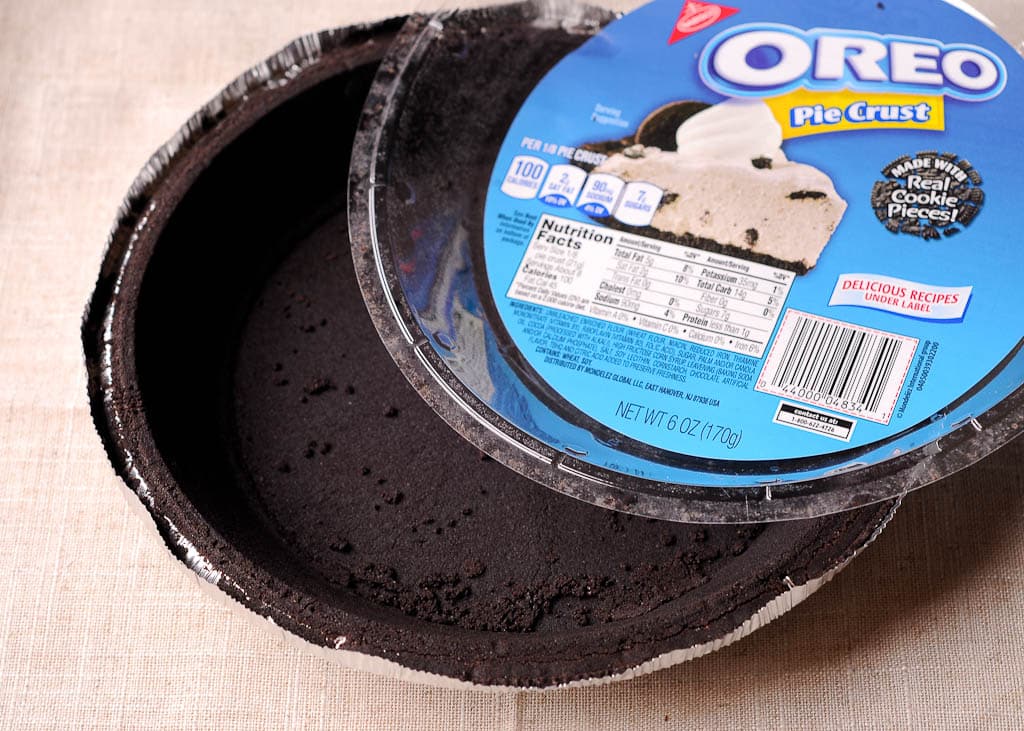 The crust is very crumbly. Be careful. 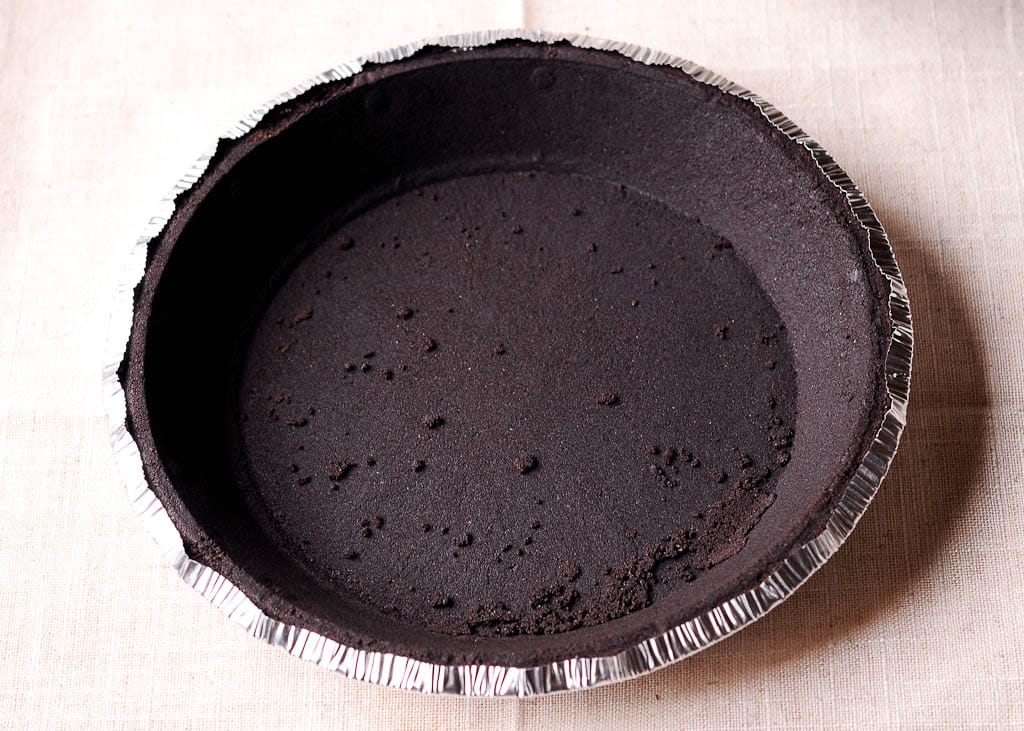 Add half and half to the medium bowl. Then add both packages of instant chocolate pudding. Using a whisk, mix for 2 minutes until all mix is dissolved. Allow the pudding to sit in the fridge or freezer for 5 more minutes so that it thickens. 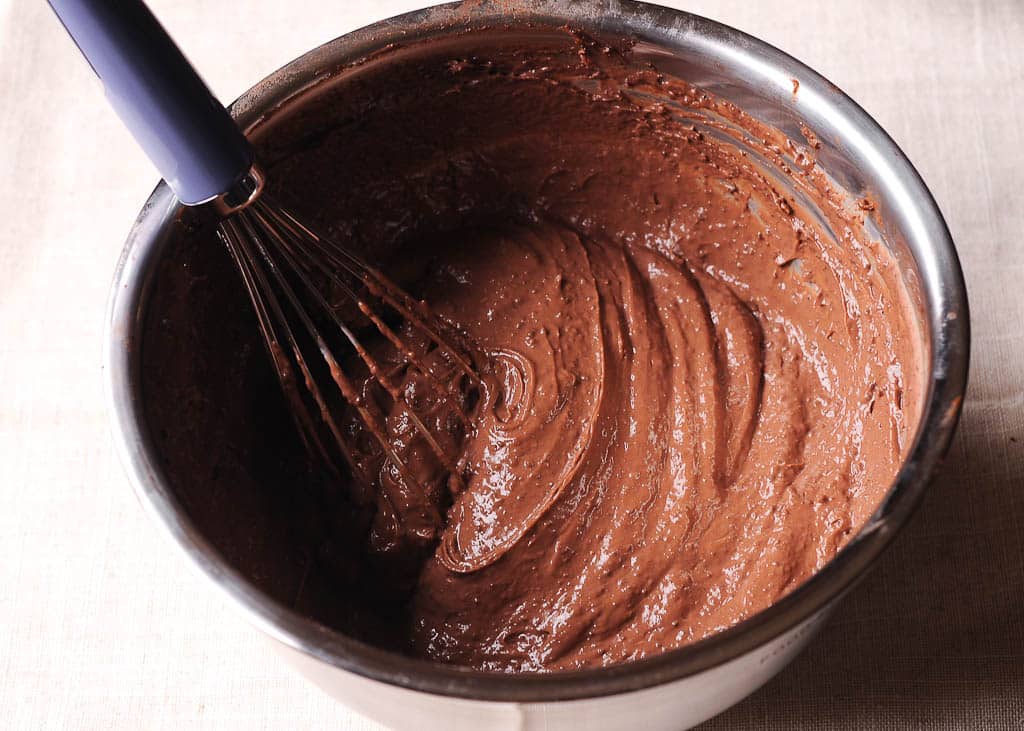 Once the pudding is thick, take about 1/2 of the chocolate pudding mixture and spread it as a first layer. You will mix the remaining pudding will be mixed with Cool Whip to form the second layer. 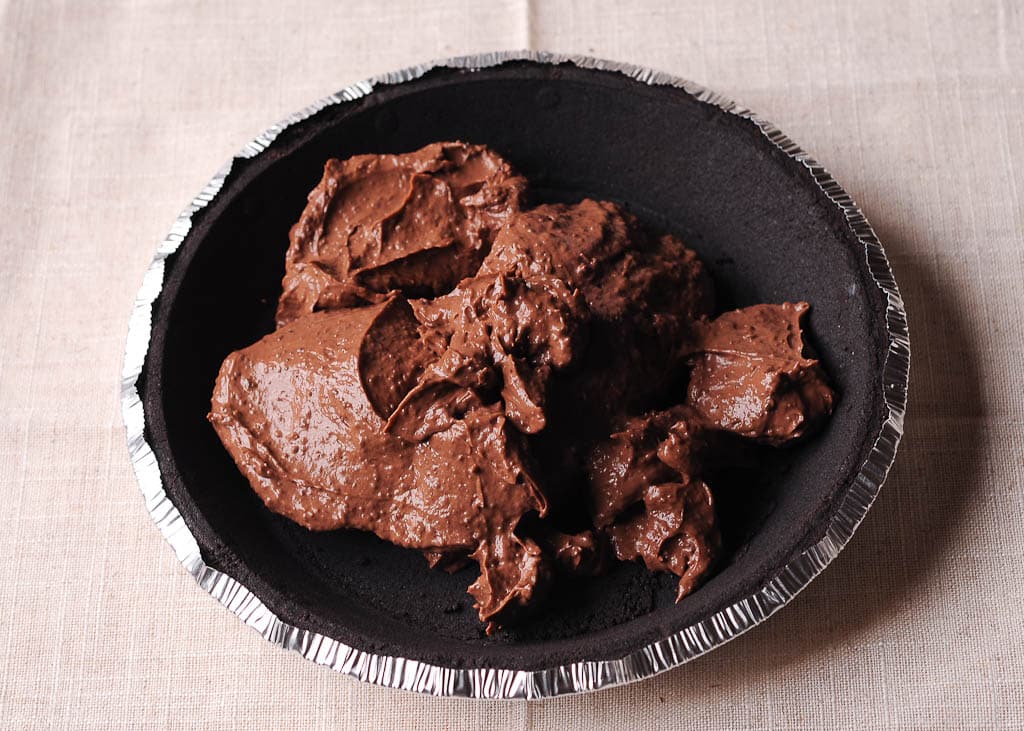 Work with the spatula to even out the first layer 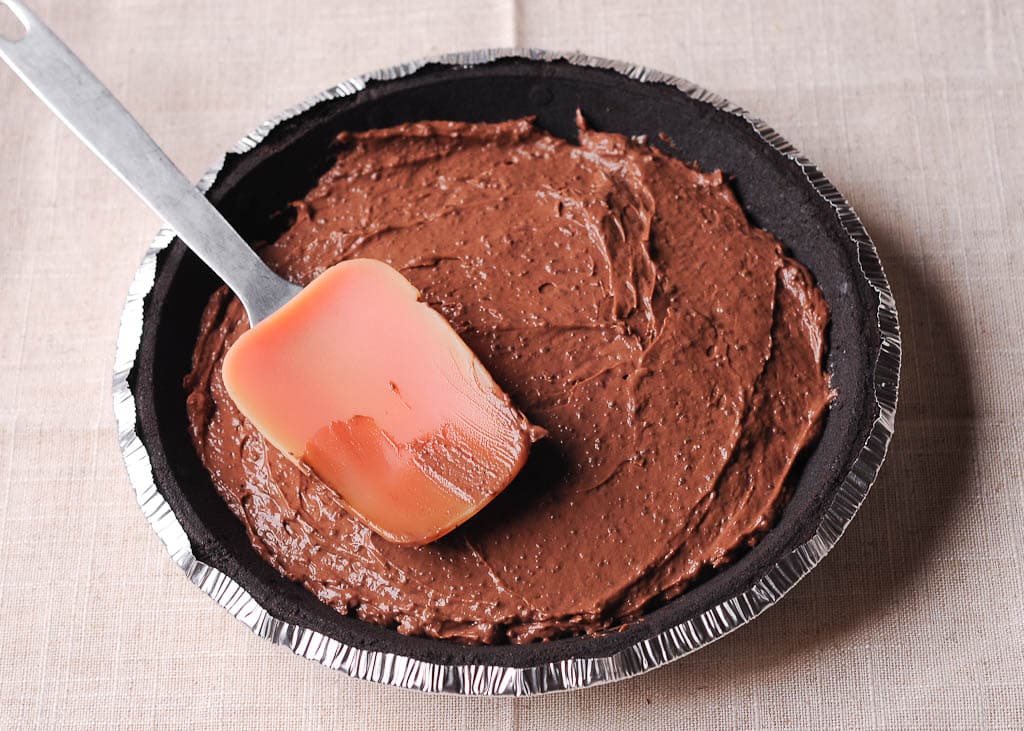 Add 1/2 of the Cool Whip package to the remaining 1/2 of the chocolate pudding in the bowl. 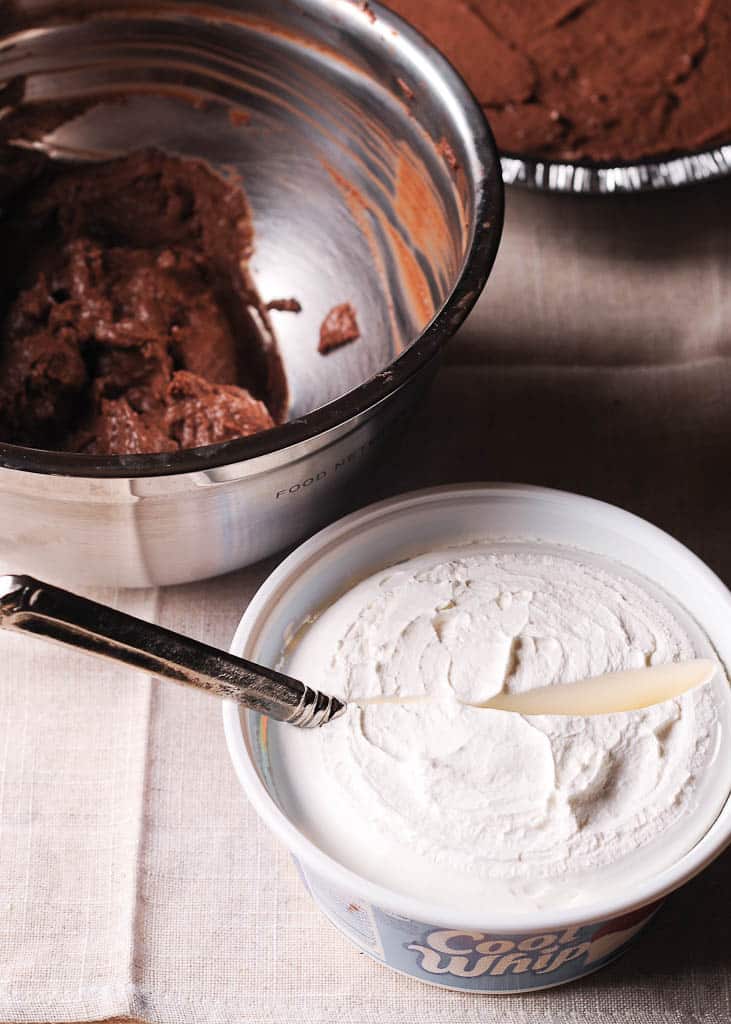 Whisk it together or use a spatula to form a uniform mixture for the second layer. 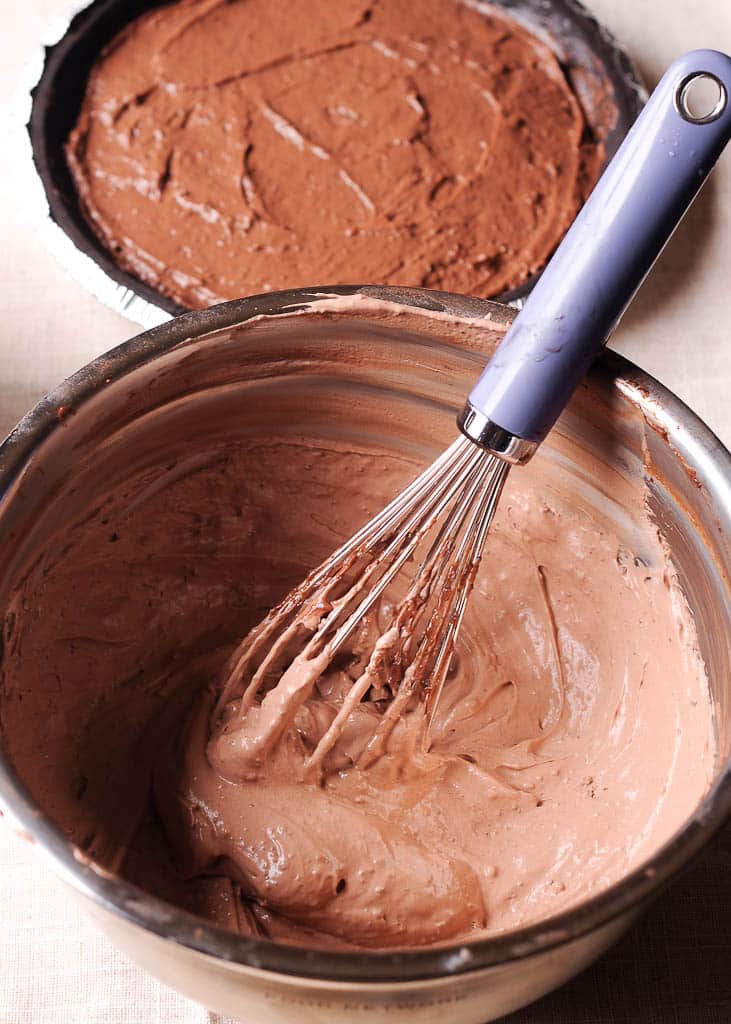 Add this Chocolate Pudding/Cool Whip mixture on top of the first layer. This layer is much smoother and lighter than the first chocolate layer. 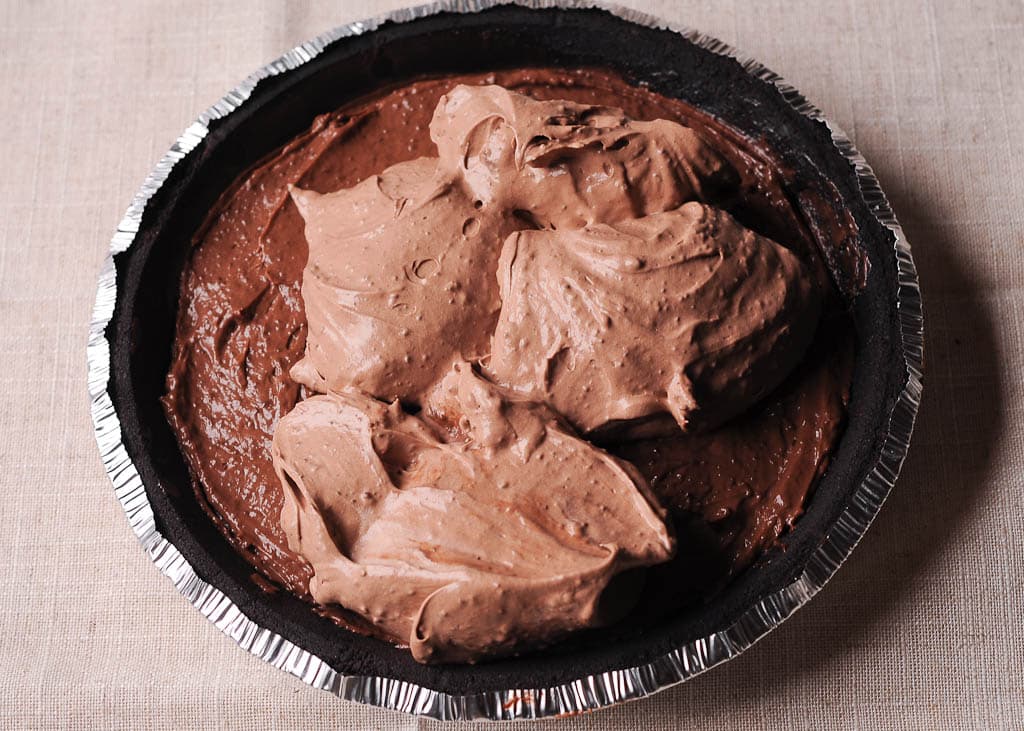 Spread Chocolate Pudding/Cool Whip layer with a spatula to even it out: 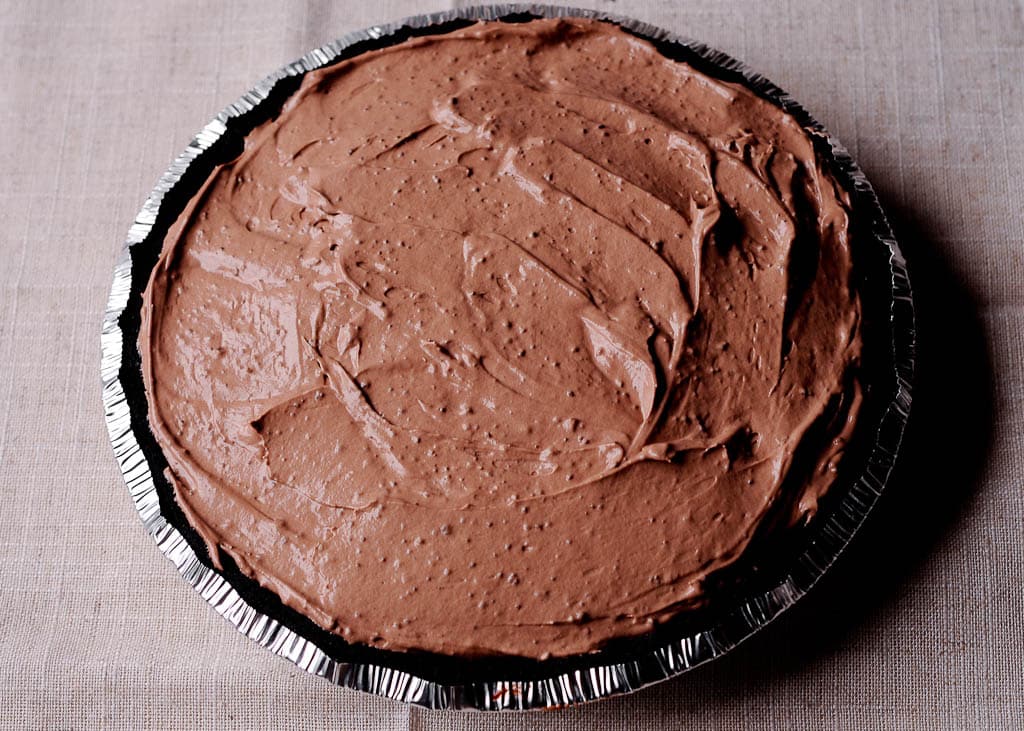 Add remaining Cool Whip on top of the second layer. Work with a spatula to spread it. I used short circular motions with my spatula to create the spikes: 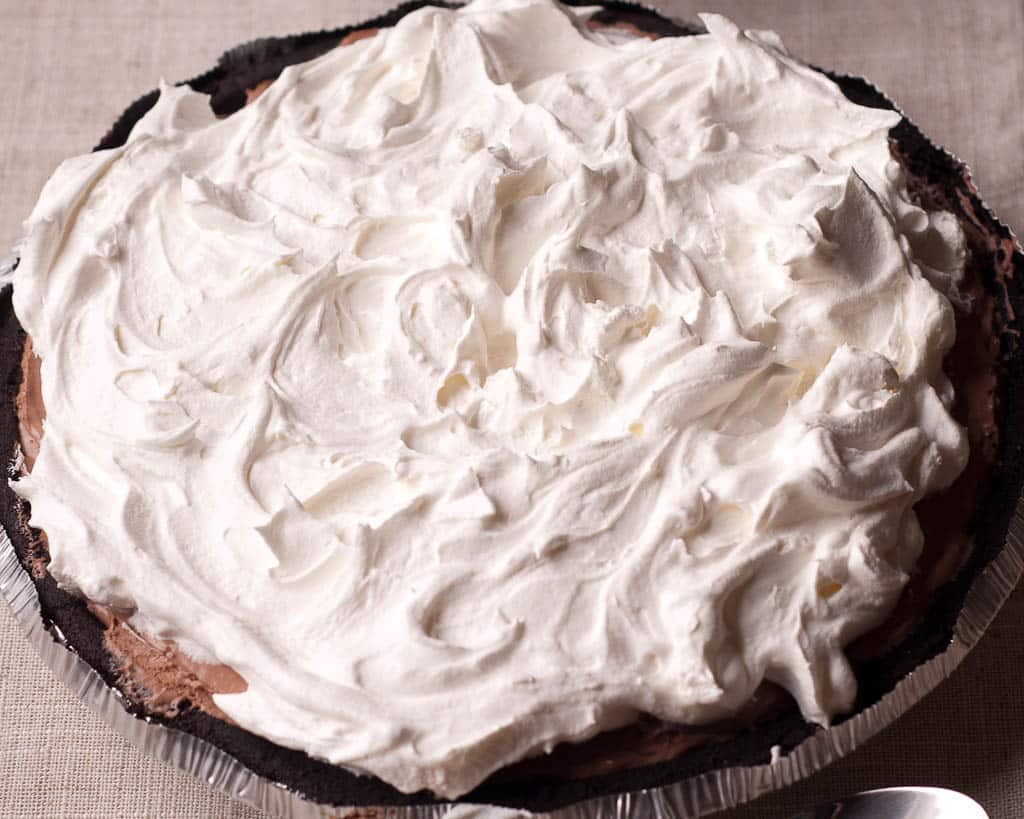 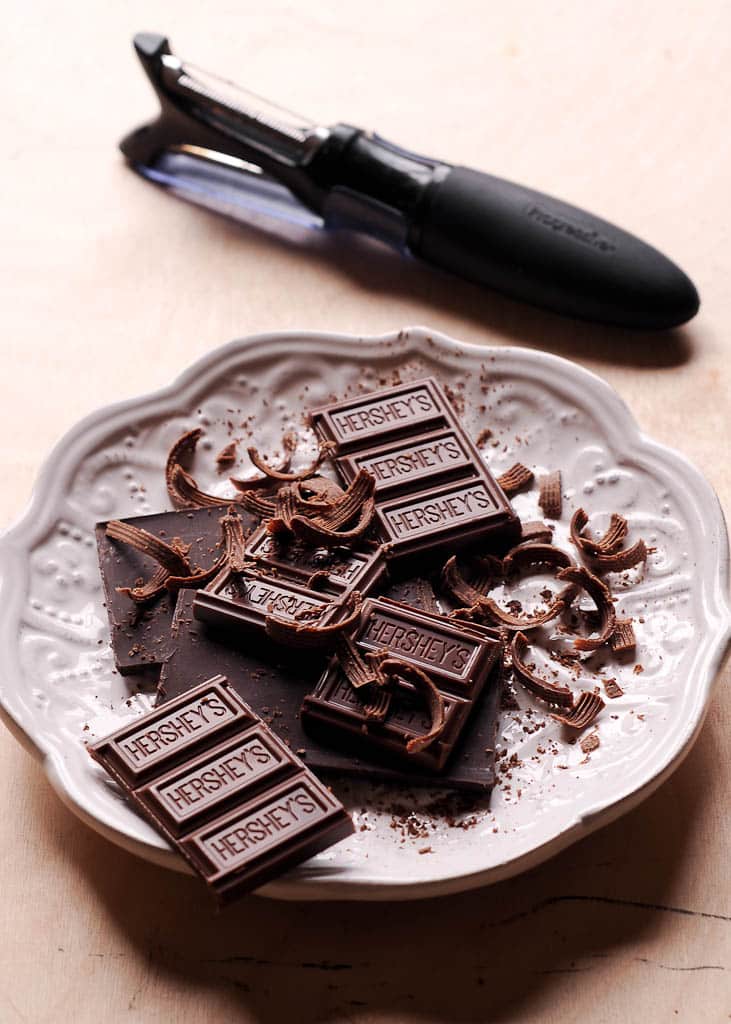 Using a vegetable peeler, it’s easy to shave decorative chocolate shavings right over the Cool Whip to decorate this no bake dessert. The long strips are from Hershey’s milk chocolate while the finer dust is from grated dark chocolate. I used same peeler to make both. 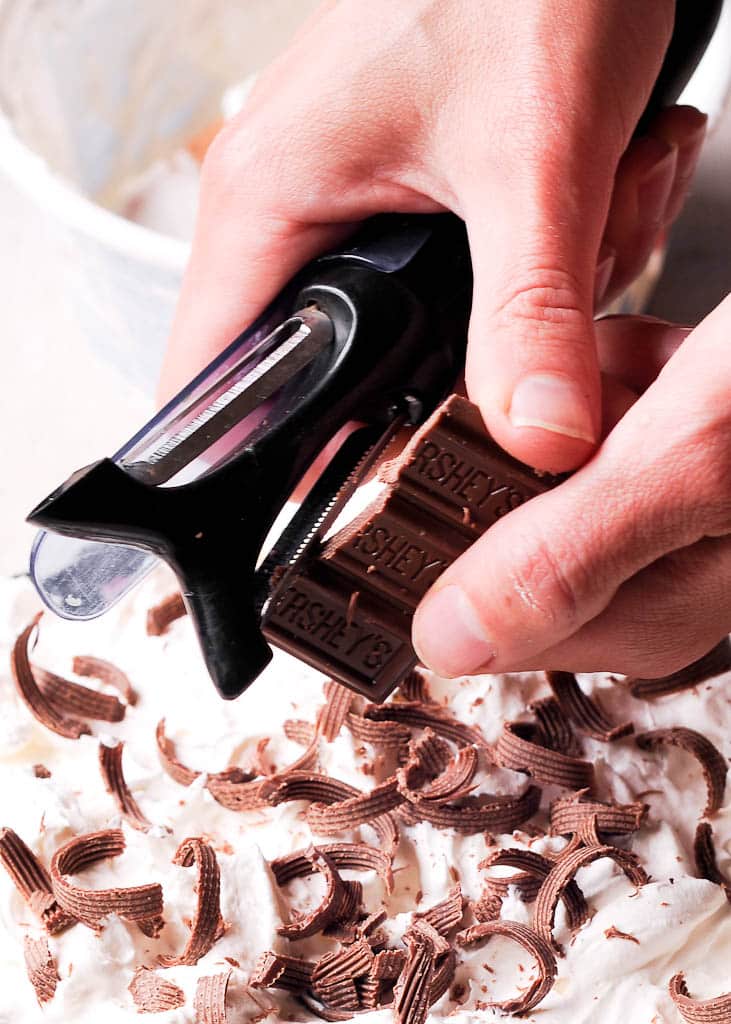 Make sure to get a good amount of chocolate shavings as well as some chocolate dust. 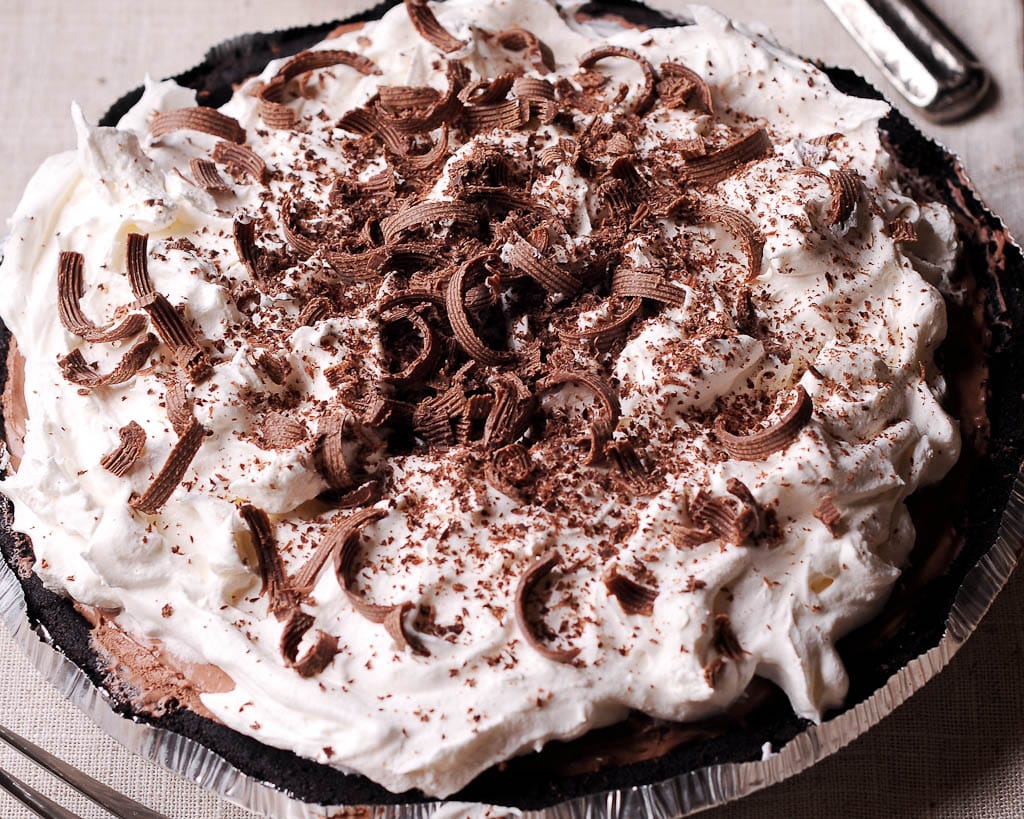 This Easy No Bake Chocolate Cream Pie is done! Make sure to refrigerate it at least 4 hours (preferably over night). You can also freeze it for at least 1 hour before attempting to cut it! 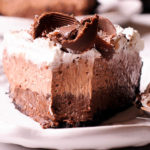 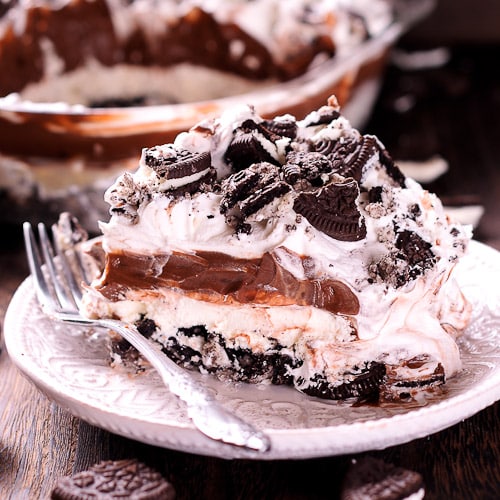 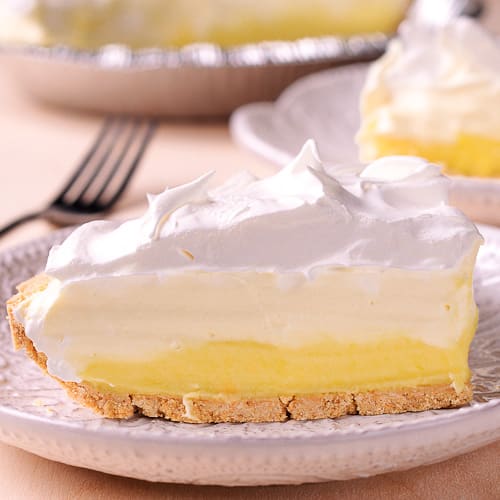 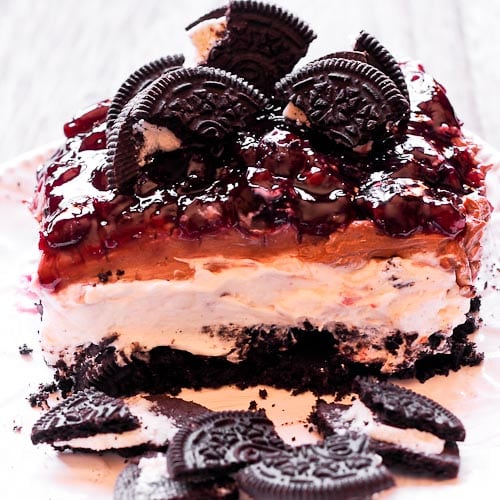