This rich and decadent vegan chocolate frosting is shockingly delicious! It’s sweet, creamy and easy to whip up! Every time I make it, people always ask for the recipe!

This is quite possibly the best vegan chocolate frosting you will ever make, even if you aren’t a vegan.

The first time I made the recipe was for a regular non-vegan chocolate cake, where I did not want to use any dairy or too much sugar. I wanted good fats from coconut cream as well as some nut butters incorporated in my vegan chocolate frosting recipe. It worked! No dairy, very little sugar – it’s almost too good to be true!

It’s naturally gluten free, dairy free, oil free, and vegan… and I’ve served it to enough people by now who aren’t on any kind of special diet that I can confidently say: even if you’re used to traditional sugary chocolate frostings, you will fall completely in love with this delicious vegan frosting. Just try it and see.

This Chocolate Frosting recipe is made with coconut cream, almond milk that is whipped together with powdered sugar, cocoa powder, vanilla and cashew butter. It has a smooth and silky texture, without using any butter! Naturally gluten-free!

How to make frosting

Believe me, this is one of the easiest recipes you can make. You can do it with your eyes closed! Just get the ingredients and start whipping!

How to store vegan chocolate frosting

Only in the refrigerator! This vegan chocolate frosting will last for one week in the fridge as long as its in an airtight container. If you plan on using it to frost a cake, you’ll want to bring it to room temperature for 1 hour first and then whip it a bit to get it light and fluffy again before using.

Because it’s free of additives, any processed ingredients, or  trans fats, it’s best to use it up as soon as you make it!

So, there you have the easiest, tastiest vegan chocolate frosting recipe! Hope you find it super delicious and absolutely love it!

If you love this vegan recipe, I recommend that you also try Raw Vegan Chocolate Coconut Bites and Vegan Energy Bites. 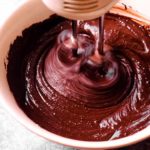