Asiago Cheese Chicken, Ham and Potato Casserole is delicious and very easy to make dish. It’s also quite cheesy. Asiago cheesy. You will need to restrain yourself from finishing the entire casserole before sharing it with family and friends.

Why use Asiago cheese in the casserole?

Asiago cheese is that one special cheese that has the power to make any dish taste good. It’s smooth in texture and sharp in flavor. It complements the buttery potatoes and chicken and creates a nice contrast to ham.
This chicken, ham and potato casserole will make your holiday dinner unforgettable.

How large should a casserole be?

First, lay out the sliced potatoes and generously cover them up with salt and pepper!

Then, add the chicken cubes on top of the potato layer. Again, salt and pepper liberally!

Finally, pour the heavy cream and sprinkle with scallions. Voilà! All the work by now is done.

The final step is to put this Asiago Cheese Ham, Chicken and Potato Casserole in the oven for an hour and enjoy a TV show or a book! Or look up a new recipe on this blog, such as: 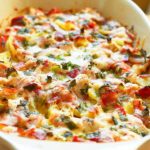 For the buttery Asiago Cheese sauce: