This Easy Bread Pudding never fails in simplicity, tastiness and rave reviews from family and friends. It’s perfect for breakfast when served with warm cinnamon sauce! And it’s a classic dessert that is simple to make with very few ingredients! Simply add milk, eggs and vanilla!

We found this bread pudding recipe years ago and now it’s a family favorite along with Chocolate Chip Bread Pudding, especially for brunches around the holidays! My family calls it the best bread pudding ever created and it is one of our go-to easy dessert recipes now.

What is Panettone Bread Pudding?

We make our Best Bread Pudding out of boxed Panettone. If you never had it, Panettone is a sweet Italian bread. It’s loaded with candied citron, rum flavor lemon zest and raisins. It’s very yummy, despite the fact that it comes in a box. By the way this boxed Italian Christmas bread is similar to a fruitcake, traditionally served during the holidays. The legend holds that in the late 1400s, a young Milanese nobleman fell in love with the daughter of a baker named Toni, and as a result created “Pan de Toni” to impress his love’s father. Such a nice love story about bread!

So if you see the boxes the Italian sweet bread popping up everywhere around holidays, but never tried one, here’s a golden opportunity to do so! And don’t forget to try Chocolate Chip Panettone Bread Pudding either!

I like to eat this Bread Pudding as it is, but we always serve it with warm cinnamon brown sugar sauce and whipped cream. You will find the recipe for the delicious cinnamon sauce in this post at the bottom. Who knew that traditional Italian sweet yeast dough bread modified into a pudding is such a tasty thing! Delicious!

Can I make my bread pudding ahead?

Yes, you can definitely make this easy bread pudding recipe ahead. I suggest that you bake it the night before and then simply refrigerate it. When you need it, simply reheat it in the oven for best results. I usually reheat it in a 350 oven for about 10-15 minutes in order to heat it up a bit. It will taste just like freshly baked version!

So if you see Pannetone (or baked French bread) in the stores in the upcoming months, you know what to do now!

How to make bread pudding

It is so simple, that you will ask yourself why haven’t you made it before! First, you will cut up your Panettone. Then lightly butter a large baking dish. Arrange the bread cubes in prepared dish and set aside.

Next, in a large bowl,  you will whisk eggs, whipping cream, whole milk, and  sugar. Blend them well. Pour the custard over the bread cubes. Then press the bread cubes gently to submerge.

Let stand for 30 minutes, occasionally pressing the bread cubes into the custard mixture. You can do this step 2 hours ahead. If that’s the case, cover and refrigerate.

To make a great bread pudding recipe, having the right ratio of bread to custard is paramount to get the right texture. While the ratio is important, the bread you use in your bread pudding can also make or break your dish.

Preheat the oven to 350 degrees F. Bake until the pudding puffs and is set in the center, about 45 minutes. Cool slightly. Spoon the bread pudding into bowls, drizzle with the warm cinnamon syrup, and serve.

I also made Chocolate Chip Panettone bread pudding with Bourbon Butter Sauce, and it turned out so amazingly good that it now rivals this one! 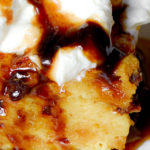 « Chicken Thighs with Bacon
How to make the best seared chicken »