This Chocolate Chip Panettone Bread Pudding by itself is so decadent and luxurious! But it is the Bourbon-Butter sauce that puts this dessert over the top. And provides a very elegant finish!

Chocottone is Panettone with Chocolate Chips

Chocolate chip bread pudding makes this Chocotone look good and sophisticated. Yet this bread pudding is so simple and delicious!

The box also says that it’s “made for ice cream”, but I think that the bread pudding version of it is a match in heaven for Bourbon Butter sauce.

I am so pleased with how the Bourbon Butter Sauce turned out! It is soft, creamy and smooth. And it should definitely be served warm.

If made in advance, whisk and reheat before serving. This sauce is perfect for topping this bread pudding, and it would also work on other desserts, such as a cobbler or a pie.

How much Panettone to use for this Bread Pudding

This recipe for Chocolate Chip Panettone Bread Pudding uses just 1 pound, which is slightly more than half of the boxed 26 oz loaf. The bread itself is seasoned with the holiday spices. So if you get one as a present for Christmas , this is a great way to make use of this Italian treat. All you need is 9×9 inch square pan. At least, that’s what I used.

And it’s not just a dessert. It is a pretty  good breakfast if you ask me. Pop a slice of this Chocolate Chip Panettone Bread Pudding into a toaster in the morning and then add some butter or even cream cheese on top.

You can make this Chocolate Chip Panettone Bread Pudding for Thanksgiving, Christmas or a New Year – what a perfect treat for any holiday.

I always like to dust my Panettone bread pudding with confectionery sugar before serving. And take a picture of the dusting process as well. Even though this one appears quite smudged.  But with warm bourbon butter sauce all around and a sprinkle of confectionery sugar on top it looks quite elegant and is super tasty.

And how about the most amazing no bake dessert made with Oreos! No Bake Oreo Dessert with Cream Cheese, Cool Whip and Chocolate Pudding? 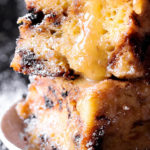 This Chocolate Chip Panettone Bread Pudding by itself is so decadent and luxurious, but it is the Bourbon-Butter sauce that puts this dessert over the top, and provides a very elegant finish.
Prep Time15 mins
Cook Time45 mins
Total Time1 hr
Course: Dessert
Cuisine: Italian
Servings: 8
Author: WhatsInThePan