This version of a traditional Irish dish brings together four of the most amazing ingredients – potatoes, cabbage, kale and bacon to make a very filling and delicious side dish – Irish Mashed Potatoes with Bacon, or Colcannon.

In this Irish Mashed Potato recipe you got all the nutrients in one place: starches from potatoes, fiber from kale and cabbage, and protein from bacon and cream.

To make Colcannon, just boil the potatoes, cook the bacon, then cook kale and cabbage in the bacon fat, mix it all together with butter and cream.

You will need a medium pan to boil the potatoes in and a skillet to cook bacon in as well sauté cabbage and kale. I used a cast iron skillet such as this 12 inch Lodge Pro-Logic Seasoned Cast Iron Skillet – it’s well designed, has a helper handle and sloped sides – very sleek looking for cast iron! And it’s one of my most used kitchen tools!

What makes this Irish Mashed Potatoes recipe great is that you can adjust the proportions of potatoes, greens, butter, and milk. Want to use more cabbage? Yes, please! Add some Brussels sprouts into the mixture? Why not?

Cabbage contain many different antioxidants that have been shown to reduce chronic inflammation, it improves digestion, provides us with fiber and keeps heart healthy!

Kale is also quite a superfood that has been shown to lower cholesterol, reduce the risk of cancer and support the body’s natural detoxification system. Kale is rich in Omega-3’s and vitamin K, both of which have anti-inflammatory properties.

And how about all these anti-inflammatory qualities of cabbage and kale COMBINED?! Maybe I should have named these healthy Irish Mashed Potatoes!

Irish Mashed Potatoes are also called Colcannon, which means “white-headed cabbage” in Irish and apparently it is also a name of a song about this dish.  Maybe we should all listen to eat while cooking and eating this dish!

Now back to the actual Irish Mashed Potatoes.

Someone on the Facebook noted that kale should not be used in Colcannon due to its bitter taste. I personally really liked the addition of kale here and didn’t find it tasting bitter at all.

Cooked kale doesn’t taste bitter, but it does have a fresher flavor compared to cabbage and when sautéed with garlic, it takes on a uniquely delicious flavor. I highly recommend adding it to your Irish Mashed Potatoes to see what I’m talking about.

Colcannon and Halloween in Ireland

I’ve read on Wikipedia that Colcannon is commonly served at Halloween in Ireland. A ring or a coin is hidden in the dish, and the recipient is supposed to be blessed with marriage or wealth in the following year. How nice!

Well, I’m so glad to have decided to make Irish Mashed Potatoes because I never realized until today how well cabbage fits into mashed potato-butter combination. And because it was so filling, that’s all we had for dinner tonight.

I love eating potatoes and can have them every day because they are so versatile:

And if you need more ideas for your holiday table, please check out these amazing holiday recipes: 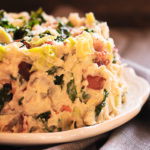